There is yet another 'Best of' list of books to read, this time being Outside Magazine's The 10 Greatest Adventure Biographies. It's a wide-ranging collection featuring such diverse characters as Ernest Shackleton, Bruce Chatwin, Henry Morton Stanley and Marco Polo. And then there is Donald Crowhurst. 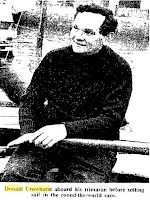 Donald Crowhurst was one of nine competitors who in June 1968 set out from Falmouth, England, on the Sunday Times Golden Globe, the world's first singlehanded nonstop round-the-world sailboat race. After battling with hurricanes and damaged equipment in a boat that many thought was unsuitable, the British sailor Robin Knox-Johnston was the only person to complete the race. His feat though was overshadowed by the bizarre journey of Crowhurst, who had secretly abandoned his attempt while reporting false positions in an attempt to claim the prize money without actually circling the globe, and then committed suicide. While he had designed marine navigation devices, it turned out that the man was in fact an inexperienced sailor who had bluffed his way into the event.

I always wanted to include the Crowhurst story in Those Who Dared but there was very little material about him in either the Guardian or the Observer. I eventually came across an excellent Malcolm Muggeridge review of The Strange Last Voyage of Donald Crowhurst, by Nicholas Tomalin and Ron Hall. For an in depth essay about the sailor, I'd recommend Geoff Powter's We Cannot Fail: The Dark Psychology of Heroic Adventure.

Posted by Richard Nelsson at 16:02