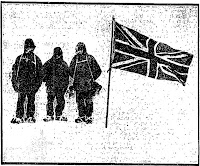 Two crates of Scotch whisky dumped in the Antarctic by polar explorer Sir Ernest Shackleton are to be recovered after a century buried in the ice.

The rare Old brand of McKinlay and Co whisky was left by Shackleton when he was forced to abandon his expedition to the South Pole in 1909. The crates were discovered under the Cape Royds hut used by the team, in 2006. Now, distiller Whyte & Mackay has asked explorers from the New Zealand Antarctic Heritage Trust to retrieve the the precious liquid – either the actual bottles or a syringe full – so that they can recreate the unique flavour.

Shackleton's 'Farthest South' expedition came to within 97 nautical miles (about 112 statute miles) of the South Pole on January 9 1909 but was forced to turn back due to a lack of food.

The picture of three of the four-man expedition (Shackleton, Frank Wild, Eric Marshall and Jameson Adams), appeared in the Manchester Guardian on November 4 1909.
Posted by Richard Nelsson at 14:39