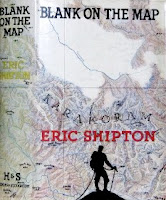 The first week of December is traditionally the time when newspapers and magazines begin to publish their round-ups of books of the year. And of course publishers capitalise on this by advertising their wares to Christmas present-buying readers - as can be seen from the following advert that appeared in the Observer on December 4 1938. Hodder & Stoughton took out a half-page advert to display reviews of their output and, in particular, the Black Jacket series of climbing and exploration books.

It's interesting to see which books are still talked about and what's been forgotten. Eric Shipton's Blank on the Map is still referred to, as well as Frank Smythe's books (including The Valley of Flowers). However, Ronald Kaulback is a name rarely mentioned these days. 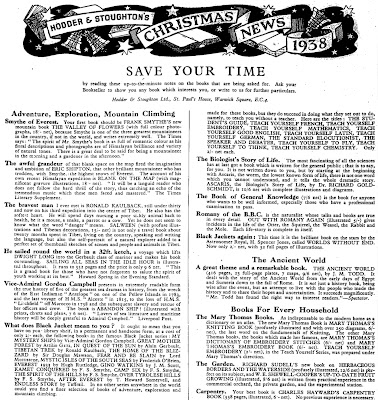 (click image to enlarge)
Posted by Richard Nelsson at 12:40 3 comments:

It is 30 years since Peter Boardman and Joe Tasker were last seen on Mount Everest attempting to traverse the pinnacles on the unclimbed north east ridge. To commemorate the lives of the two climbers who pioneered a series of groundbreaking ascents, as well as producing books that have acquired classic status, the Boardman Tasker Prize for Mountain literature was set up by family and friends in 1983. The aim was to promote mountain related literature and, three decades later, it is still going strong. The winner of the 2012 prize (from a very strong shortlist) is announced on Friday 16 November.

By coincidence, I've been working my way through the Boardman Tasker Omnibus, a collection that includes the climbers' four books - two published posthumously. I was familiar with some of Boardman's work but less so Tasker's. Apart from the well told tales of close calls and danger, what struck me about the latter's writing was his honesty about the risks and fears of life at high altitude.  As he says in Everest The Cruel Way, an account of a winter attempt on the west ridge in 1980, 'whichever way a big mountain is climbed it is rarely enjoyable'. Of course there is the physical hardship but there are also the tensions that develop between team members forced to spend weeks together in close proximity. Tasker doesn't shy away from criticising fellow climbers, but handles it in such a way that the reader understands disagreements in the context of the expedition.

Aside from this there are details that make you realise just how much has changed over the past 30 or so years. On his first Asian expedition, Tasker drives an old Ford Escort van across Europe, Iran and Afghanistan to get to Dunagiri, a 7,000 metre peak in Northern India. On the 1980 Everest trip, there is the excitement - in the pre-internet age - of receiving hand-written letters. Also, the team was filing news reports about the expedition for the Observer and in return the paper was mailing out a copy each week. Tasker describes the disorienting experience of reading news weeks after the event (including reports of John Lennon's death).

One minor disappointment with the Omnibus is the lack of photos from some of the climbs (or at least in my edition). I did come across came a Boardman Tasker feature about their 1980 K2 west ridge and Abruzzi spur expedition in the Observer though. This does include some stunning pictures. Both writers provide accounts of the climb in their respective books - one of the collection's strengths being the contrasting views of various expeditions.

Some interesting notes by Boardman about his early climbing career, written in 1981 for a talk at Stockport Grammar School, can be read here.
Posted by Richard Nelsson at 09:58 6 comments:

The debate over whether climbers and mountaineers should compete for medals in organised events has been going on for decades. In the mid-1970s there was furious opposition from British climbers to a USSR suggestion that the sport should be part of the Olympics (see end of article), but more latterly there has been some excitement that ice climbing will be a cultural event at the 2014 winter games - not to mention climbing being considered for the main Olympics in 2020.

Against this background, the Mount Everest Foundation recently organised a discussion, Race to the Top - What place does competition have in the mountains?, at the Royal Geographical Society.

The starting point for the evening was Kenton Cool's talk about his expedition to take a 1924 Olympic Gold Medal for Alpinism to the summit of Everest. Following the success 1922 assault on the mountain in which the team got to within 500 metres of the top, the International Olympic Committee decided to mark the achievement by awarding medals to all 21 members of the team. The presentation was made at the 1924 Winter Olympic Games and Edward Strutt, deputy leader of expedition, vowed to return to Everest and leave one of the medals at the summit.  However, by that time a number of the climbers were already on their way back to Tibet for another attempt at the mountain and the promise remained unfulfilled. Cool finally honoured the pledge in May 2012 by taking a medal that had belonged to Dr Arthur Wakefield, the oldest member of the group, to get to the top.


It was an exciting and enthusiastic talk, illustrated with dramatic film footage of Cool's ascent. While a cynic might suggest the whole medal business was just an excuse to make another adventure film, set in the context of the excitement surrounding the 2012 Olympics, and the heroic story of George Mallory and the climbing pioneers of the 1920s, the whole exercise seemed to make perfect sense.

Why people actually want to go up mountains was explored by Sir Chris Bonington. One of the key differences with other sports, he said, is the element of risk. Bonington gave the example of the 1977 Ogre expedition where, despite Doug Scott having to crawl down the mountain due to breaking both legs above the ankles, and suffering broken ribs himself, there was a certain exhilaration of just being where they were, high on the mountain. He also showed a rare 1970 interview with Dougal Haston and Don Whillans on Annapurna. Asked why he climbed, Whillans said it was partly to do with the fact that as a tradesman, he liked to do a job well. This 'practical' approach, he contrasted with his climbing partner's 'intellectual' approach. Haston claimed the attraction of the sport was the opportunity of being in charge of your own world. Both were valid points but Bonington admitted that climbers can be very egotistical, wanting recognition from their peers.

The danger of climbing for more than just peer recognition was explored by Doug Scott. In 1974 he was invited to take part in an International climbing camp in the Pamirs, at the invitation of the Russian Mountaineering Federations. The purpose of the gathering was in part due to the Russians' wish to promote high altitude climbing as part of the Olympic Games. Unfortunately eight women climbers from the host nation died near the summit of Peak Lenin. Apart from being badly equipped, they were under pressure to succeed which may well have led to them making the wrong decisions high up on the mountain. (A Scottish team was also invited to the camp).

If Olympic medals were indeed to be awarded for mountaineering achievement, Sandy Allan and Rick Allen would be in line for the gold. Earlier this year they conquered the Mazeno ridge on Nanga Parbat – one or the last great climbs in the Himalayas. Their story can be read in this Observer piece.

The panel discussion included the speakers plus Lindsay Griffin and Phil Bartlett, and chaired by Ed Douglas. It soon became clear that two strands of the sport were being debated: organised competitions on artificial walls, and serious ascents at high altitude. The general consensus appeared to be that it is fine to make awards after the event - such as the Piolets d'Or or indeed something like the 1924 medals - but pointless, if not impossible to operate and very dangerous if designed to get people to 'race to the top'. It was also mentioned that such awards usually come from outside the sport, not the actual practioners.

There was also agreement, or at least a tolerance in some quarters, that there is no harm in the organised climbing competition. Kenton Cool though did make a strong case, citing the fact that with 'mountaineering' being one of only four sports in the UK to show an increase in participation, it should be in the Olympics. If nothing else it would raise the profile and attract sponsorship. Apart from that though, as anyone who has ever watched such an event will know, they can be incredibly exciting, and easily on a par with many other Olympic sports. As an example, Ed Douglas urged the audience to take a look at  footage of British climber Fran Brown, Paraclimbing world champion.

The event was held to raise money for the Mount Everest Foundation and Community Action Nepal.

Posted by Richard Nelsson at 22:24 No comments: