March 24 is the anniversary of the death of Yevgeniy Abalakov, the Russian mountaineer who died in 1948 at the age of 41. As Soviet mountaineer No.1, he was the first to climb Stalin Peak (renamed Communism Peak in 1962, Ismoil Somoni Peak in 1998). On February 17, 1943, Alabakov was part of a group of military mountaineers who worked their way through mine and ice fields on Mt Elbrus to throw off Nazi flags and set up Soviet ones. This symbolic event crowned the 15-month-long battle for the Caucasus.

These days the name Albalakov is more often associated with Yevgeniy's older brother Vitaly - also a mountaineer and regarded as the 'father' of Russian climbing. Vitaly Abalakov made many difficult ascents including Lenin Peak in 1934. He also did considerable work on climbing equipment development and most mountaineers will be familiar the Abalakov thread, his most famous invention, This simply consists of two holes being drilled into solid ice to form a v-like channel. Tape or cord is then threaded through and tied together to form a loop, which is then used for belaying or abseiling.

I was introduced to the thread on a recent ice climbing trip and must admit to feeling extremely nervous at the thought of putting my trust in what is essentially a bit of tat wrapped around some frozen water. It was soon demonstrated just how strong the belay actually is, although I'll leave it up to mountaineer Andy Kirkpatrick to give a full explanation.

Of course with great inventions there can be conjecture as to who came up with the original idea. It has been said that it was actually the American climber Jeff Lowe who developed the technique which may explain why in certain parts of the globe the anchor is known as the V-thread. Good historical background can be found in this article from Glenmore Lodge.

I was hoping to find a great article about one of the Abalakov brothers unfortunately there were only a few mentions in the archive. The following article mentions Vitaly but I reproduce it merely to illustrate what elite Scottish mountaineers were wearing circa 1974. 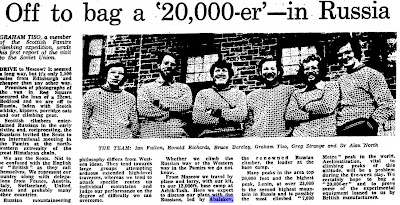 Posted by Richard Nelsson at 12:28 No comments:

Climbing up the Eiffel Tower

Sad to hear that Guardian journalist, Peter Lennon, has died at the age of 81. Peter was a junior Paris correspondent for the paper in the 1960s, before leaving to freelance. He re-joined as a feature writer and interviewer in 1989 and stayed until 2005, although continuing to contribute pieces until quite recently. In 1967 he and French cinematographer Raoul Coutard released The Rocky Road to Dublin, a portrait of Ireland in the 1960s - a film that caused great uproar in Peter's country of birth. Read more about his life in the Guardian obituary and also New Yorker blogpost.
Peter was a brilliant writer so it was a pleasure to be able to use one of his pieces in the Guardian Book of Mountains. It's about a mountaineering triumph but not quite the usual sort of report as the following from May 1964 shows: 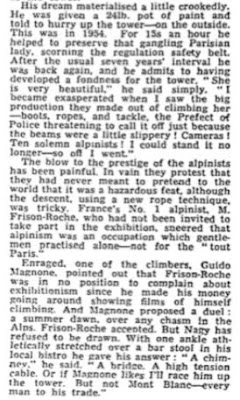 The article appeared in an early edition of the paper on May 4 1964 and was re-printed on May 26. Read more here.
Posted by Richard Nelsson at 13:58 No comments:

A statue of Victorian journalist and explorer, Henry Morton Stanley was unveiled in Denbigh, North Wales, on March 17 . The life-size bronze portrays him at the moment he found fellow adventurer Dr David Livingstone - arm outstretched, hat by his side and presumably uttering some memorable words. Residents of the town voted in favour of commemorating its most famous son and £31,000 was raised to pay for sculptor Nick Elphick's statute. 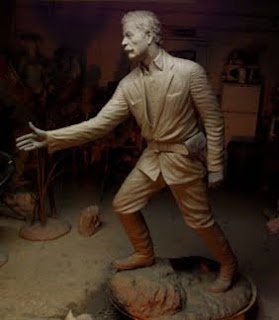 Of course Stanley always claimed to be American but he was actually born John Rowlands and brought up in Denbigh's St Asaph workhouse. He emigrated to the US in 1859.

Not surprisingly, the statue has proved to be controversial. Many in the town are proud of the explorer and feel he's had a bad press, being misrepresented both by the Victorian establishment and latter day historians. However, at the unveiling of the statue, Selwyn Williams, a lecturer at Bangor University, representing opponents of the memorial, told reporters: "Stanley was one of the cruellest Victorian expeditionary surveyors. Needless to say all the statutes of Stanley in Africa have been taken down a long time ago. They (Stanley and King Leopold II of Belgium) turned the Congo into the worst example of colonisation, brutal exploitation, enslavement and genocide in Africa. I'm sure most Welsh people share the view that Stanley's 'exploitation by warfare' in Africa was contemptible."

Tim Jeal, author of Stanley: The Impossible Life of Africa's Greatest Explorer unveiled the statue and wrote about the day in the Daily Telegraph. And talking of Stanley statues, it's about a year ago since it was reported that there were moves afoot to restore a memorial to the explorer in Kinshasa, capital of the Democratic Republic of Congo.
Posted by Richard Nelsson at 20:31 No comments:

Around 400 armchair adventurers recently gathered at Leicester Square's Vue cinema to hear a diverse bunch of explorers share tales of their travel epics around the globe. This Night of Adventure included a pensioner who ran around the world, extreme base-jumper, crazy kayaker and an ex-soldier who walked the length of the Amazon.
Rather than being allowed to ramble on about their exploits, each speaker was limited to just 20 slides, each of which scrolled forward automatically every 20 seconds. In most cases this format worked very well with the speakers whetting appetites and leaving the audience wanting to hear more.
The first to take up this presentation challenge was Oli Broom who cycled 25,000 from Lords Cricket ground, London, to Brisbane Cricket ground, Australia to see the ashes. He made it in one piece and went on to watch England win the series. This was followed by Bonita Norris, the youngest British woman to climb Everest and then a succession of speakers ranging from professional explorers to the those who just head off in search of excitement. Highlights included Tristan Gooley, the 'Natural Navigator' and his infectious enthusiasm for travel using only nature's sign posts, and Rosie Swale-Pope who at 57 embarked on a mammoth five year adventure to run around the world. Absolutely unbelievable and she left audience and fellow-explorers alike in awe of her determination.
The final speaker, Ed Stafford, is the first known person to walk the length of the Amazon river. His talk was a little different to the others in that he was totally honest about both physical and mental stresses of travelling alone through inhospitable territory. 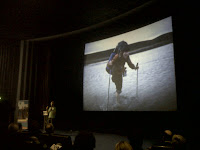 The event was organised by Alastair Humphreys in aid of Hope & Homes for Children. Alastair, whose adventures include a four year cycle ride around the world, chose to talk about a recent trip to Iceland where he followed a river from its source to the sea. It was a good illustration of the fact that you don't have to commit to year long feats of endurance to experience adventure.
A list of all the speakers can be seen here.
Posted by Richard Nelsson at 17:49 1 comment:

Art at the rockface 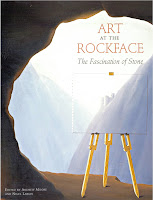 A recent trip to Sheffield involved spending a bit of time in the city's Craft and Design Gallery. To be honest, displays of cutlery aren't really my thing although there were some impressive looking coffee pots to be seen. However, while wandering around the small shop I came across Art at the rockface: The fascination of stone, the book to accompany a 2006 exhibition of the same name. The study examines the way a whole range of artists have used stone in their work, whether it's those who sculpt, paint or fashion jewellery. Names include everyone from Magritte (left), Richard Long, William Turner, to ancient rock carvings.
One of my favourite paintings from the book is The Mountains of Thermopylae, 1852, by Edward Lear (below). While best know as the author of nonsense verse and limericks, he was also a talented landscape painter. 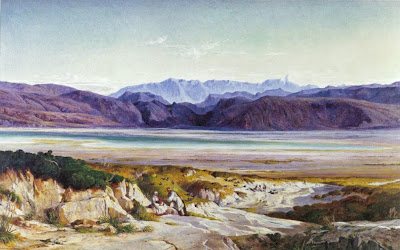 At the heavily discounted price of just £1.00, I just had to buy the book. It's selling for £21.25 on Amazon so hurry on down to the gallery while stocks last.
Posted by Richard Nelsson at 15:04 No comments:

The news that an Everest expedition plans to eat a series of gourmet meals all the way up the mountain was guaranteed to ensure a few headlines. Climbers on the Iceland Everest 2011 will have food prepared by an expedition chef and served on tables with linen, napkins and fine wine. Catalan chicken and boeuf bourguignon are just some of the delights that will replace the usual rehydrated mush. Alan Hinkes, a member of the climbing team, can be heard talking about the expected culinary delights on a recent BBC Radio 4 Today programme.
Of course fine dining on Himalayan mountains is hardly a new phenomenon. The 1924 British expedition's provisions included quail in foie gras, 1915 vintage Montebello champagne and crystallised ginger, all supplied by Fortnum & Mason. Going further back, in 1906 Dr and Mrs Bullock Workman were said to enjoy champagne and 'jugged hare in tins' while climbing in the mountains of Kashmir. Meanwhile, on the 1930 international expedition to Kangchenjungu, Hettie Dyhrenfurth, wife of its leader GO Dyhrenfurth, was responsible for managing provisions and equipment. As the Manchester Guardian reported, supplies included "dainties and essentials ranging from caviare and pate de foie gras...to say nothing of a ton or more of chocolate. For liquid nourishment there are, among other things, 500 bottles of Munich beer, cases of whisky, rum, champagne, brandy and different kinds of liqueurs".
A serious amount of booze was also taken on the 1936 French attempt of Hidden Peak - "unnecessary luxuries" as Frank Smythe put it in a review of Himalayan Assault, the book of the expedition (Observer, September 28, 1938). Beyond this though, the review is an interesting account of the changes taking place in mountaineering during the 1930s. 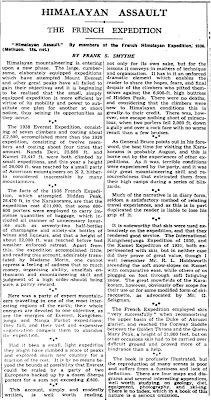 Posted by Richard Nelsson at 17:26 No comments: