George Everest and the Manor Hotel

Christmas travel plans included staying at the Manor Hotel, Crickhowell in south Wales. Plenty of character in a fantastic location, it's also supposed to be the birthplace of George Everest in 1790 - although the building was then known as the Manor of Gwernvale. 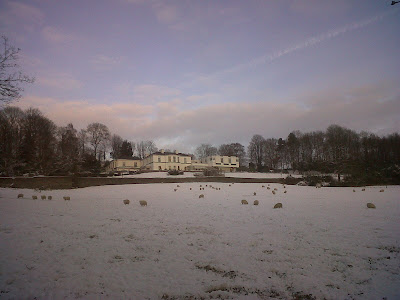 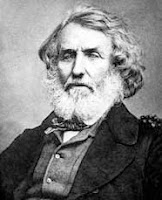 While the world's highest mountain was named after Everest in 1856, the military engineer and geodesist was always rather embarrassed by the honour. The story goes that in 1852, Radhanath Sikhdar who worked for the Grand Trigonometrical Survey of India, discovered what he thought was the highest peak in the world. Several years later this was confirmed and despite it already being called Chomolungma by the Tibetans and Sagarmatha by the Nepalese (words not deemed "intelligible to civilised man"), the British decided to name it after Colonel George Everest, head of the survey.

News of the great discovery eventually reached the British papers - the following Manchester Guardian article appearing on October 7 1856 (lifted from the Times, as was the custom in those days). 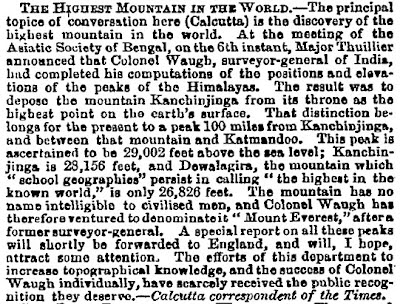 It's that time of year again when stories appear about people stripping off and jumping into freezing water. Almost every paper has to have at least one picture of a lido or grim looking beach, complete with swimmers wearing silly Santa hats and skin the colour of beetroot. OK, I've done a few these festive dips in my time (and written about them). I was intrigued though by a story in the South China Morning Post (£) about Wim Hof who's going for an icy dip in Hong Kong of all places. The 51-year-old Dutch adventurer is hoping to break his own world record of immersing himself under ice for one hour and 44 minutes.

This is but the latest of Hof's extreme adventures. He has climbed to the top of Mount Kilimanjaro in under two days wearing shorts, and run a full marathon within the Arctic Circle in Finland in temperatures close to minus 20 degrees Celsius - as well as an underwater ice swim. A man of extremes, he's also planning to run 50 kilometres in a desert without drinking water.

Posted by Richard Nelsson at 17:05 No comments:

Silken flag at the South Pole

So it's 99 years this week since man finally made it to the South Pole. At 3pm on December 14 1911, Roald Amundsen and his team deduced that they had reached their destination and, as the Norwegian explorer later wrote, "gathered round the colours, a beautiful silken flag. All hands took hold of it, and, planting it on the spot, gave the vast plateau on which the Pole is situated the name of the King Haakon VII Plateau."
Of course news of the success didn't emerge until the beginning of March the following year. Countless articles and books have been written about the journey but I rather like Amudsen's initial matter of fact account. The following piece appeared in the Observer on March 10 1912. 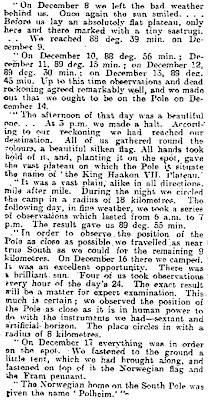 The excellent UrbanGhosts site features Leningradskaya Station, a disused Soviet research facility in the Antarctic. Opened in 1971 and closed 20 years, the ramshackle collection of rusting buildings might lack the charm of the Edwardian huts of the Scott era, but they still have a certain presence.
Intrigued by pictures the outpost, I had a quick look in the archive and came up with the following piece from January 28 1989. There is talk that the station could be reopened but if it is someone will have to work out how to get rid of it's waste. It is fair to say that the visitors from Greenpeace were not too happy with the rubbish-dumping practices of the Russians.
As can be seen from these pictures, the station is perched atop a great looking cliff.

(click to enlarge)
Posted by Richard Nelsson at 17:20 No comments: