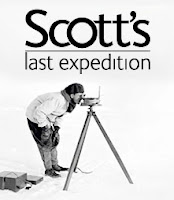 I finally made it to Scott's last expedition, the Antarctica exhibition at London's Natural History Museum. It closes on 2 September but I'll recommend it anyway. The exhibition features a wide range of personal items, photographs and some of the 40,000 scientific specimens brought back by Scott's team, as well as videos and a life-sized representation of the Cape Evans hut.

It's an impressive collection and certainly sheds light on the often overlooked scientific aspect of the Terra Nova expedition. Perhaps a little more effort could have gone into making the hut feel like the real thing but at least it showed just how cramped the base was.

Plenty of polar exploration books were on sale but Roland Huntford's titles appeared to be missing. All a bit odd, particularly as the introduction to the exhibition acknowledges the various revisions of Scott's character - and the aim to look at the expedition from all angles. Good to see though that by far the best seller (at least in terms of books left  on the shelves) was Apsley Cherry-Garrard's, The Worst Journey in the World.

The journey in question was of course the quest to secure an unhatched Emperor penguin, something that had to made in the middle of the winter. Cherry-Garrard recounts in the book reaction of the Natural History Museum when he turned up in 1913 to deliver the three eggs he had brought back from the Antarctic: 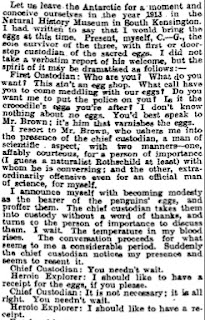 However,  as reported in the Manchester Guardian, the  museum didn't entirely agree with this version of events:

Posted by Richard Nelsson at 19:07 No comments:

Climbing and base jumping

Perhaps it was because I recently saw Leo Holding's The Asgard Project, but the following story caught my eye in the Observer archive. Holding and his team scaled Mount Asgard, a 2,000-metre high tower of granite in a remote glacial region of Baffin Island in Arctic Canada, and then two of them made a wingsuit descent from the summit.

George Felbermayr's adventure wasn't quite as dramatic but it was a surprise to discover that people were making such descents after serious climbs, nearly 50 years ago.

More about the Edge of the Impossible article mentioned in the caption.
Posted by Richard Nelsson at 16:18 No comments:

The Guardian Under Canvas: A history of camping

It used to be said that Guardian readers ate muesli, wore sandals and went on camping holidays in the English Lake District. While there’s only anecdotal  evidence to support the first points, the paper’s archive is full of articles about the joys of life under canvas.

From declaring in 1901 that camping was ‘a most wholesome occupation’, the paper has reported on everything from new tent designs, bizarre outdoor movements, the sanitary arrangements on continental campsites, fire-making, to where to find the most authentic ‘glamping’ experience.

The very best of these articles has been brought together in The Guardian Under Canvas, a new ebook that offers a unique history of camping in Britain.

The story begins in the early 20th century with the emergence of the cycle-campers, a band of mainly middle-class men led by Shropshire tailor, Thomas Hiram Holding. After the first world war,  a more diverse group began to sample the joys of the outdoor life and during the 1930s camping clubs and sites began to appear all over the country. In the decades following 1945,  the paper reflected the fact that more and more of its readers were forsaking their beloved Lake District for the more exotic France, while in the 1980s many were opting for the easier life offered by readymade campsites such as Eurocamp. The growth in recent years of outdoor music festivals, environmental concerns, combined with the appearance of very cheap tents and equipment, has led to the current boom in popularity of camping.

But alongside these developments, the book also examines changes in society’s attitude to the great outdoors as well as attempting to find out why the comfortably well-off are happy to pay for the privilege of spending their holidays in a muddy field with basic amenities. More than one commentator casts a jaundiced eye over the recent commercialisation of what used to be called ‘roughing it’.

This though is very much in keeping with the Manchester Guardian’s (Manchester was dropped from the title in 1959) historic interest in the great outdoors. The early growth in camping went hand in hand with a general concern for health and wellbeing, it being considered good for the nation’s health to escape the industrialised cities once in awhile.  This was very much the view of the paper, which championed the outdoor movement and the need for all members of society to enjoy a holiday. As such, the paper promoted recreational camping from the very beginning and has continued to do so ever since - whether it's discussing the relative merits of the yurt or the teepee, or urging readers to try wildcamping.
Posted by Richard Nelsson at 17:53 3 comments: