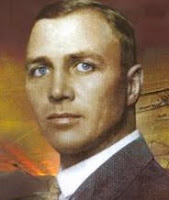 Gunther Plüschow was the only German PoW to make it home from captivity during either world wars. After escaping a prison camp at Donington Hall, Derbyshire on July 4 1915, he, and fellow inmate Oskar Trefftz, managed to catch a train to London. Newspapers were soon running stories about the men which led to Trefftz's capture. 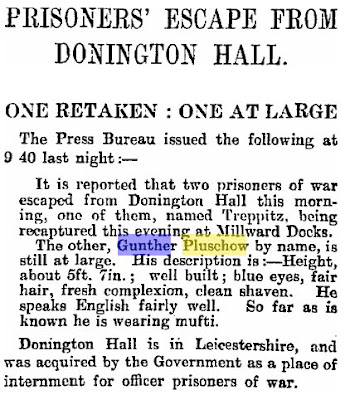 Plüschow though eventually managed to stow away on a Dutch ship at Tilbury Docks and make it back to Germany. After the war he married and became an aerial explorer. The story of his escapade was published a few years after the war. Manchester Guardian review, June 25 1922: 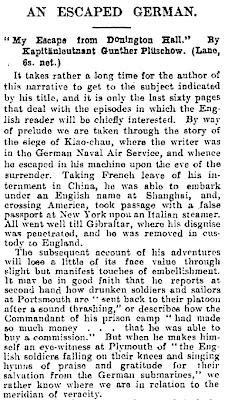 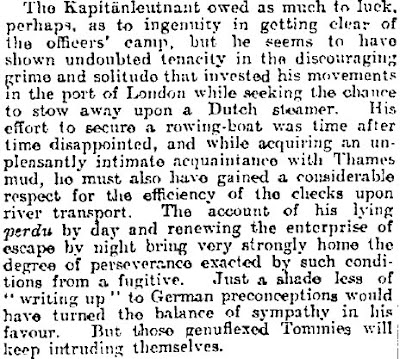 Plüschow was killed in 1931 in a plane crash while exploring a glacier over southern Chile. His exploits had been largely forgotten until Anton Rippon set about telling his story using documents in German archives. Gunther Plüschow: Airman, Escaper and Explorer has just been published while there's more about him here, here and here.
Posted by Richard Nelsson at 17:54 1 comment:

In 1881, Lieutenant Adolphus W. Greely led the US Lady Franklin Bay Expedition to northern Ellesmere Island as part of the first International Polar Year (a series of coordinated international expeditions to the polar regions). One of the aims was to create an Arctic base. However, the adventure ended with Greely and six others being rescued in June 1884. Soon after, the expedition received international attention due to evidence of cannibalism.

Michael Robinson writes on Time to Eat the Dogs that "the Greely Expedition was supposed to represent a new kind of Arctic exploration, one focused on international, collaborative science rather than pell mell dashes to the North Pole. In the end, however, the expedition signaled the end of serious collaboration between Arctic explorers and scientists for decades". This is followed by a excerpt about Greely from The Coldest Crucible. Michael was also an advisor and contributed to a recent PBS documentary about the exhibition which can be viewed here.

Incidentally, the post includes page images from the Illustrated London News. Between 1842 and 1971, the paper was one of London's major publishing institutions, pioneering the use of drawings in the service of reportage. At its peak, the ILN had a circulation of about 300,000 and was the publication of choice for the Victorian middle classes, transforming illustrations into a credible, factual, news reporting tool. Previously, illustrations had been used mainly for political caricatures or for sensational events like public hangings. Compared with the dense, text heavy, pages of other papers from the time, the ILN is a joy to view (and the reason why I decided against including Greely content from the Manchester Guardian in the post).

See here for access to the ILN digital archive.

Posted by Richard Nelsson at 11:44 No comments:

The announcement that the British Government is planning a £250 million sell-off of England's publicly-owned forests has been met with huge opposition from many sections of society. While not all Forestry Commission land is to be sold off, and it will keep its role overseeing the country's woodlands, there is much uncertainty (to say the least) over guarantees over access for future generations. The fear is that private landlords may restrict walkers and mountain-bikers coming onto their land.
However, it is worth remembering that the Forestry Commission was created in 1919, not for public leisure needs, but to provide timber for the nation. The first world war had severely depleted Britain's woodlands and towards the end of the conflict, David Lloyd George, the prime minister, thought that the country was in greater danger of defeat through a shortage of timber than of food. The seriousness of the situation can be seen from this Observer report from April 21 1918 (click image to enlarge):

The Forestry Act of 1919 set up the commission with power but without a tree to its name. By 1939 though, it had planted 600,000 acres of new woods and in 1936 the first 'national forest park' was created in Argyll with others being established in Snowdonia and the Forest of Dean before the second world war.
Supporters of the forestry sale point to the fact that the commission has caused much environmental damage in the past, replacing ancient deciduous woods with commercial confiners, while whole areas have been covered in dark green blankets of forest with no regard for the surrounding area. Ennerdale in the English Lakeland is often cited as one of the worst examples of this and Harry Griffin, one of the Guardian's country diarists, was often critical of the desecration of the valley. However, the commission has changed its policy over the decades, a glimpse of which can be seen in this Griffin piece from July 1 1968: 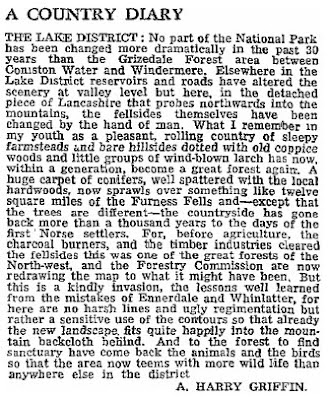 Posted by Richard Nelsson at 11:59 No comments: