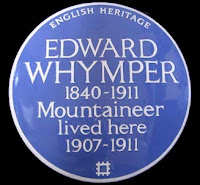 Edward Whymper has become the first mountaineer to be commemorated with an English Heritage blue plaque. One hundred years after his death, the Teddington home of the first man to climb the Matterhorn now boasts one of the unique design icons. The plaque was unveiled by Mick Fowler, president of the Alpine Club - the great organisation of which Whymper was a prominent member.

It was on July 14 1865, after eight attempts, that Whymper finally made it to the top of the mountain. However, on the descent four members of the party were dragged to their deaths, as reported in the Manchester Guardian on July 21 1865: 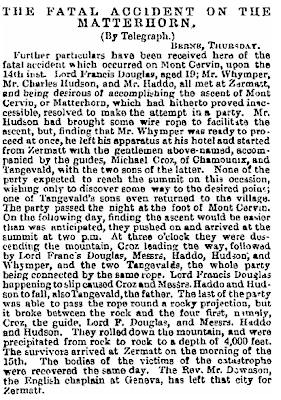 This provoked a scandal with claims that the rope had been cut and there was even talk of Queen Victoria suggesting that mountaineering should be outlawed. Whymper was haunted by the deaths and he later wrote in Scrambles Amongst the Alps "I see my comrades of the Matterhorn slipping in their backs, their arms outstretched, one after the other". But not everyone blamed him for the accident as shown by the following article which appeared in the paper a week later:

Read about Whymper's London here.
Posted by Richard Nelsson at 18:11 No comments:

The death of John Hanning Speke

A new book reappraises 19th-century explorer John Hanning Speke's place in history. During his life, Speke's claim to have the found the Nile source was challenged and his achievements were diminished by fellow traveller Sir Richard Burton, who described him as a "deluded nonentity" - a view repeated by successive biographers. However, Tim Jeal reveals a very different man in Explorers of the Nile, someone who he believes should be in the pantheon of the world's greatest explorers. Read more about it in an Observer article and a piece by Jeal.

Speke's theory that Lake Victoria was the source of Nile was rejected by Burton, thus beginning a bitter public dispute between the two men. On September 15 1864, shortly before Speke and Burton were to debate the subject publicly, Speke was killed by his own gun while hunting. It remains uncertain whether it was an accident or suicide. It was a sad end to an eventful life, as shown in this Manchester Guardian news item from September 19 1864: 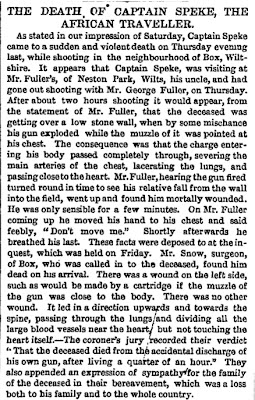