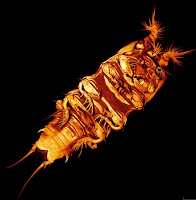 It has long been said that there are better maps of the moon than the Earth's ocean floor but the new Census of Marine Life reveals a little more about the 'twilight zone' where light barely penetrates. See a film about it here.

The census, a major international project surveying oceans, identified 17,650 species living deeper than 200 metres - the area where photosynthesis is impossible. Bizarre finds include an otopus with an elephant-like appearance, a tiny golden crustacean called a copepod (see left) and, more than 1.7 miles deep, a transparent sea cucumber filmed creeping forward on its many tentacles. Robot submersibles and sea-floor rovers, coring drills, dredges and trawling nets were used for the survey.

The news of this survey reminded me of reading about the excitement surrounding Dr William Beebe's deep sea discoveries in the 1930s - made with the help of the Bathysphere. This was a steel sphere equipped with look-out windows of fuzed quartz that made nearly twenty dives off Nonsuch Island, in the Bermudas, reaching a depth of 2,220 feet, the farthest that living man had then penetrated into the ocean.

Posted by Richard Nelsson at 14:40