Geoffrey Moorhouse and The Fearful Void

Geoffrey Moorhouse, the author and former Guardian features writer, has died, at the age of 77. He joined the paper in 1958 and, after having produced hundreds of stories on everything from the Matterhorn to the Mormons, left in the early 1970s to concentrate on writing books.

Moorhouse was to publish over 30 titles but one his bestsellers was The Fearful Void, the tale of his epic camel-back journey across the Sahara.

The 41-year old began the 3,600 mile trek in October 1972, the main reason being to examine the roots of his fear and to explore the extremes of human experience. He explained: ''It was because I was afraid that I had decided to attempt a crossing of the great Sahara desert, from west to east, by myself and by camel. No one had ever made such a journey before...'

Despite being tormented by lice, chronic dysentery and finding the food, when there was any, revolting, Moorhouse’s biggest problems stemmed from the local labour he hired to help him on his quest. Amongst other things, they stole food, disappeared into passing tents for affairs d'amour, spilled precious water through carelessness, and broke his sextant.

The journey ended in failure with Moorhouse ill and exhausted, giving up 1,500 miles from his final destination. However, the resulting book did provide a moving record of his struggle with fear and loneliness. There’s a fine Elspeth Huxley essay about it in Those Who Dared, while an interview about the journey can seen below (The Guardian, February 27 1974.) 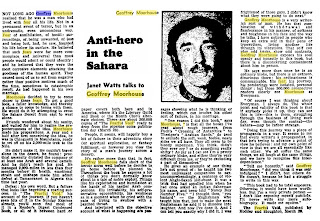 It must be remembered though that the expedition wouldn’t have happened without the help – however unreliable Moorhouse considered them – of indigenous people (see Hidden Histories posting). In 1987 the British desert explorer Michael Asher and his Italian wife Mariantonietta Peru became the first people to complete the journey by camel across the Sahara Desert, east to west.

Posted by Richard Nelsson at 14:23