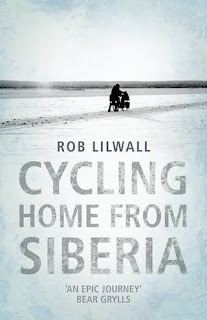 In an age when 'solo' adventure usually means having a film crew and support team in tow, it's refreshing to come across someone who really did explore totally on their own. Back in 2004, Rob Lilwall booked a one-way plane ticket to far eastern Siberia and then start cycling home. For most of the journey it was just him and Alanis, his ten-year old steel-framed mountain bike.

Thirty thousand miles, and three and half years later he finally arrived back in London after surviving a Siberian winter, the jungles of Papua New Guinea, and war-torn Afghanistan. Cycling Home From Siberia is the tale of his adventure.

The former geography teacher's original plan was to get through Russia and then make his way back via the most interesting route he could find. He ended up taking a major detour around Australia and heading through Tibet, Afghanistan, Iran and eventually Europe. His friend, Alastair Humphreys accompanied him on the first stretch, and Lilwall would occasionally cycle with others but he was on his own when it came to carrying equipment, sorting out visas, arranging boats etc. With transport costs almost non-existent and accommodation either a tent by the roadside or staying with kindly strangers, the final cost of the - self-funded - trip was around £8,000. He also raised money for the children's charity Viva.

While it must be said that literally dozens of adventure travel books are published each year, Lilwall does have an original story to tell. Where others usually include a yarn or two about drunken scrapes with locals, he recounts visiting remote churches and joining congregations in prayer. This though can be an eye-opening stuff as it's rare to hear about persecuted Christians in China or the bullet dodging pastors in remote Papua New Guinea.

Lilwall has the odd tipple too and a story about drinking illicit wine with some teenagers in Iran provides a different view of the country. Above all he is good at creating a sense of place and maintains the momentum and excitement of life on the road through a very long trip.

The most exciting sections are when the intrepid cyclist is under pressure. In Siberia the sheer physical challenge of cycling through freezing temperatures and the race to reach the border before his visa expires, avoiding the 'rascals' in Papua New Guinea or crossing Tibetan checkpoints in the middle of the night. When cycling through Afghanistan you can almost feel Lilwall's fear. After being held at gunpoint in Russia, he quotes Humphreys as saying that when you travel solo, you are seen as a nomad. As soon as you start travelling in a pair, you begin to look like tourists - and tourists are usually the ones that get robbed.

Lilwall was constantly planning the next stages of the trip and updating his blog in internet cafes. These, he notes are to found in almost every town in the world, and that they’re all the same “full of clunky computers and pre-teenage boys playing zombie games”.

Cycling Home From Siberia is a mixture of adventure/endurance book, tale of a slightly eccentric Englishman abroad, a rite of passage, and spiritual journey, but most of all it's simply a great travel book that challenges you to get out of the armchair and onto your bike. Rob Lilwall is still using Alanis to get around London - probably the most dangerous cycling of his life.

Posted by Richard Nelsson at 12:32