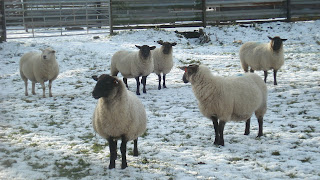 Just a bit of snow and sunshine in Herefordshire today, but explorers and adventurers have found themselves in some outlandish places on Christmas Day, without the usual home comforts. Away at Christmas, a new book of contemporary diary extracts chronicles their experiences.

For example, in 1768, the British explorer Captain James Cook set sail from Portsmouth in the barque HMS Endeavour. He had been commissioned by King George III and the Royal Society to observe the transit of Venus from the island of Tahiti. On this his first voyage of discovery in the South Seas he was accompanied by the botanist Joseph Banks, who wrote on Christmas Day:

"All good Christians that is to say all good hands get abominably drunk so that at night there was scarce a sober man in the ship, wind thank God very moderate or the Lord knows what would have become of us."

Or, in 1835 Sir John Ross (1777-1856) a Scottish rear admiral and Arctic explorer whose description of Christmas - quite rightly - focused almost exclusively on his stomach.

"Christmas Day was made a holiday in all senses. In the cabin dinner, the only fact worth remarking was a round of beef which had been in the stores for eight yearsand which,with some veal and cooked vegetables, was as good as the day on which it was cooked.

I know not whether the preservation of this meat, thus secured, be interminable or not; but what we brought home is now, in 1835, as good as when it went out from the hands of the maker, of whatever be his designation, the Gastronome for eternity in short, in 1827. If it can be kept so long without the slightest alteration, without even the diminution of flavour in such things as hare soupand purée of carrots, why may it not endure for ever, supposing that the vessels themselves be perdurable?"

Posted by Richard Nelsson at 14:16