With the melting Arctic in the news, it’s worth rembering that it is just over a hundred years since someone claimed to be the first to reach the geographic north pole. On September 1 1909, the American explorer Dr Frederick Cook declared that he had reached it, in April 1908. However, four days later, another American, Commander Robert Peary, announced ‘Stars and Stripes Nailed to the north pole’, thus making his own claim. For months controversy raged as to who was telling the truth with the New York Herald backing Cook and the New York Times, Peary.

In the end Cook failed to produce credible evidence and Peary was declared the winner, going to his grave as the undisputed discoverer of the north pole. Later in the century suspicions were raised as to whether he too failed to make it and while many believe that he was probably close, the explorer Wally Herbert is now thought to have been the first to make it in 1968-9. Peary’s expedition is now remembered as much for the fact that Matthew Henson, his assistant, was black.

As I discovered whilst researching Those Who Dared, the story regularly featured on the pages of the Manchester Guardian. This useful map appeared on September 10 1909. 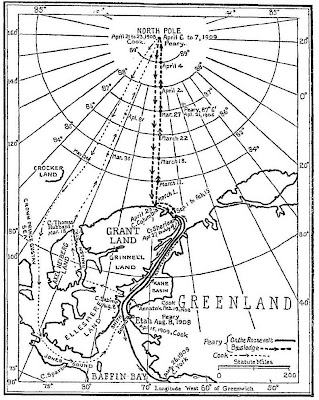 Posted by Richard Nelsson at 15:57