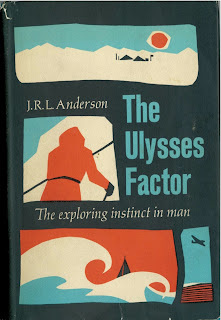 Is there really such a thing as the ‘explorer gene’? Michael Robinson takes a wry look at this on his Time to Eat the Dogs blog. It’s a rather complex subject so I’ll let him explain.

However, it reminds me of some of the ideas put forward in JRL Anderson’s book, The Ulysses Factor, published in 1970. Anderson, a Guardian journalist, proposed the theory that in man there is "some form of adaptation, which prompts a few individuals to exploits which, however purposeless they may seem, are of value to the survival of the race."

He explains that all humans have the Ulysses factor to some extent, but in modern times, where there are few frontiers left to explore, the instinct is often strong in flyers, climbers, offshore sailors, and especially solo voyagers. There area number of case studies including Eric Shipton, Bill Tilman, and Sir Francis Chichester. Great cover too.

Anderson joined the Manchester Guardian as military correspondent towards the end of World War Two and for the best part of a quarter of a century held a number of writing and editorial posts. But the job he liked best, and to which he probably appointed himself, was yachting editor, and over the years he was involved with a number or sailing adventures.

Posted by Richard Nelsson at 17:20