When Roland Huntford's Scott and Amundsen was first published in 1979, it caused an uproar. For 50 years after his death, Captain Scott's reputation had been that of a great British explorer who died a heroic death in his tent. The book challenged this view, accusing Scott of being, amongst other things, "recklessly incompetent." Huntford though has always maintained that his aim was to rehabilitate Roald Amundsen's reputation, rather than simply attack the Briton.
What led Huntford to write the book in the first place was an interview he did with Tryggve Gran (above), the only Norwegian on Scott's team, for the Observer Colour Magazine in 1974. Huntford was the paper's Scandinavian correspondent, as well as writing about winter sports, for around 15 years. After filing the original piece "the editor phoned me to say he thought there was probably a book in it. I agreed with him and was astonished to find that when the piece was published he had added a footnote saying I was working on a new biography of Scott and Amundsen. So that sort of settled things." (Guardian, December 2008)
The Man Who Remembers Scott's Last Journey is a fascinating read. Gran explains how it was a recommendation from Fridjtof Nansen, the great polar explorer, that led him to being part of a British expedition. In 1910 Scott went to Norway to consult Nansen and while visiting a ski and sled factory, the champion skier remarked "But remember, Scott, it's no use having skis unless you know how to use them properly. You ought to take a Norwegian to show you." Gran also offers some interesting views on the differing personalities of the two protagonists.
As the Observer Colour Magazine has not been digitised, colour versions can only be viewed if you're fortunate to come across a bound volume. See below for the copy that appeared on March 31 1974. Click to enlarge. 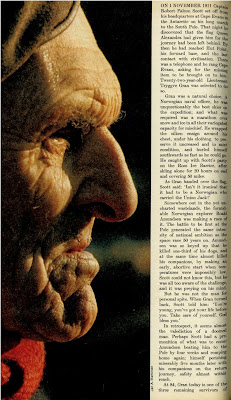 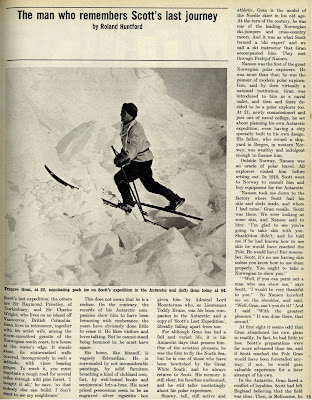 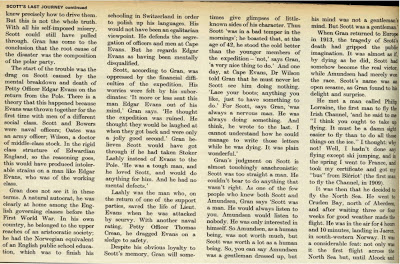 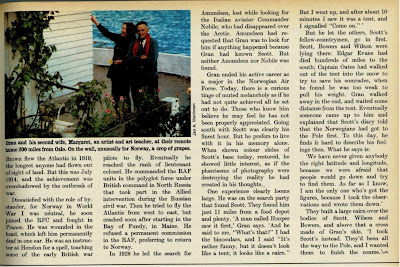 Posted by Richard Nelsson at 15:01